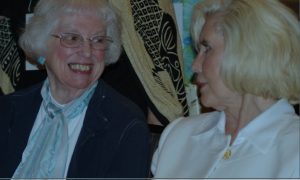 Barbara Fetterhoff and Lilly Ledbetter at the 2012 ceremony.

The AAUW Maryland established the  Barbara Fetterhoff Honorary Fund to supported the Conference for College Women Student Leaders, in 2012.  It was later renamed the AAUW Maryland Women of Distinction Award.

Born in 1929 in Bryn Mawr, Pennsylvania, she earned a B.A. at the University of Delaware.  She worked as a university, medical, and church secretary, helping to put her husband through medical school. Her husband, Ira, an Episcopal priest, was a psychiatrist in Western Maryland for 25 years. They retired to Calvert County in 1990, moved to Asbury Solomons Retirement Community in 2005, and Ira died in 2011.

Barbara was a member of AAUW Maryland for more than 60 years.  She was a member of the Harford, Hagerstown, Frostburg , Baltimore, Calvert and Patuxent Branches and president of 4 of them.  At the state level she served in a variety of positions, including Bylaws chair and Parliamentarian.

In 1981 Gov. Hughes appointed her to the Advisory Committee on Reapportionment and Redistricting, and then she served on the state election board 1983-97. She was on the Committee for Save the Maryland Theater in Hagerstown 1986-89, and was Chair of the Commission for Women in Washington County, having helped get it organized.

She was a past president or co-president of the League of Women Voters in Washington County, and three terms in Calvert County. She was also a member of the Calvert Artists’ Guild and the Concerned Black Women. She was named a Peace Builder in 2014 by the Calvert County Community Mediation Center, and she was honored in several Women of the World (WOW) events by the League, the Commission for Women, and AAUW. She also helped with Reach for Recovery for many years, visiting breast cancer patients in Calvert Co.

One of the awards she received noted that she had “always been involved with community service and outreach no matter where she lived. She was a dedicated volunteer, and Maryland benefited from her many hours of selfless service.”