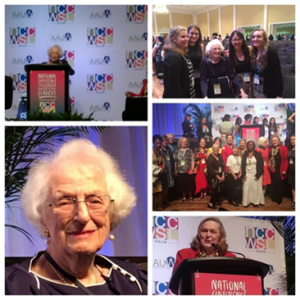 AUW of Maryland honored astronomer, Dr. Nancy Grace Roman, a long time AAUW member, in June of 2016 as part of its continuing sponsorship of the Women of Distinction Ceremony at the National Conference for College Women Student Leaders.

Dr. Roman was instrumental in establishing the new era of space-based astronomical instrumentation.   She received her undergraduate degree at Swarthmore and her PhD from the University of Chicago.  With female tenure unlikely and janitors making more money, she left academia, joining the National Aeronautics and Space Administration (NASA) shortly after its establishment in 1958.  Long before there was a program called Women@NASA, Dr. Nancy Grace Roman was paving the path for women at NASA.  She was the first Chief of Astronomy in the Office of Space Science at NASA Headquarters and the first woman to hold an executive position at NASA ,though it took using her honorific Dr. “to get past the secretaries.”  She was tenacious in supporting female scientists as well as pushing her peers toward space astronomy.    Raised in a time when women were discouraged from pursuing a science career, she not only succeeded in establishing herself in a scientific career but also left a legacy for future astronomers.   She is often called the “Mother of Hubble” for her efforts in making the Hubble Space Telescope a reality.

Following her death in December 2016, AAUW received the largest bequest in its history from her estate . She directed that the funds be used for STEM related activities.

In 2017 Lego introduced a set of figurines honoring four NASA women pioneers, a fitting recognition of her lifelong mentoring of and advocacy for women and girls.  In 2020, she was named to the 2020 Maryland Women’s Hall of Fame  and honored posthumously by NASA. NASA  named its next-generation space telescope currently under development, the Wide Field Infrared Survey Telescope (WFIRST), the  Nancy Grace Roman Space Telescope – or Roman Space Telescope, for short.  It is set to launch in the mid-2020s to investigate long-standing astronomical mysteries, such as the force behind the universe’s expansion, and search for distant planets beyond our solar system.