AAUW Maryland was proud to be a Platinum Sponsor of the Women of Distinction Awards Ceremony at the National Conference for Collegiate Women Student Leaders on June 1, 2017.  Cleopatra Campbell was recognized as Maryland’s Woman of Distinction at the ceremony.  She was recognized with thunderous applause by the 1,000 students in attendance and, following the ceremony, was greeted by more than a hundred students who stood in line for over an hour to talk to her and take their selfies. 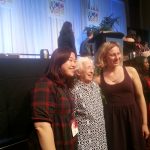 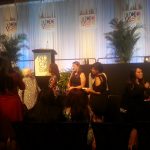 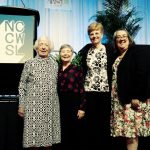 A Little About Cleopatra Campbell

Cleopatra Campbell has been a practicing attorney in  Frederick County Maryland  since the mid-1960s. Back then, it was rolling family farms. The men were the land owners and civic leaders. Women wore hats and gloves and served tea. So, when she joined the bar association it was a big deal. Later she was twice elected president of the Frederick Bar Association. Cleopatra was the first woman State Prosecutor in Frederick County. When women were first admitted to the police academy, she advocated for women’s uniforms; not men’s retro fitted, she insisted on women’s bathrooms and changing rooms. She wanted these women to be treated with equal respect. She questioned judges who demanded that she always wear skirts in court.   In 2009, Cleopatra decided she had not been appointed to a county judgeship so what did she do…. she hit the campaign trail and was elected to the probate court, serving as Chief Judge. She went on to be reelected to a second term; the only attorney on the court.

Cleopatra practiced law in a local firm, her clients were the farmers, the local business men and all community members.  At a recent party in her honor, Cleopatra joked that she was still waiting for clients who said “I’ll pay you on Friday.” She served generations of Fredrick County families, It was important to her that everyone was well represented.

As an AAUW member she is active within her branch opening her home for events and has been on the AAUW Maryland board as Legal Advocacy Fund chair and state bylaws chair. She continually mentors women to raise their aspirations to become paralegals, to be elected to county office, and be appointed to judgeships.  In addition to being a long serving attorney in this rural community, Cleopatra has traveled the world either alone or with friends or family.  She keeps going and going…. France, Kilimanjaro, China, Alaska, a camel ride in Egypt.